Pollok Country Park and the Burrell Collection combines the best of a huge outdoor park with a variety of things to do with a fantastic 8000 item indoor arts gallery.

This little adventure requires daring to go south of the river. The tales you’ve heard are all nonsense, the Southside is pretty nice. Pollok Country Park is in the Pollok area, unsurprisingly. It’s about 3 miles from the city centre, so if you get scared of the Southsiders you can get to safety pretty quickly. The park is the largest in Glasgow, and has lots of cool things in it: fields of Highlan’ Coos (it’s not just Scottish people who are hairy gingers, it’s our cattle too), red deer roaming wild, the White Cart Water, an awesome play park with a zip slide, huge and fragrant walled gardens, and an incredible art gallery called the Burrell Collection. It was voted Best European Park in 2008, so we’re talking crème de la crème here.

Getting there is actually pretty easy. The simplest way is to get a train from Glasgow Central to Pollokshaws West. That’s PollokSHAWS not Pollokshields. WEST, not east. It’s an easy mistake to make. The departures board at Glasgow Central kindly updates you with what trains go to the park – it’s trains that terminate in East Kilbride, Barrhead or Kilmarnock. So it’s actually very easy to get to using the rail network. You’re only on the train for 9 minutes, so don’t get too comfortable and miss your stop! Once you get off at Pollokshaws West, get out and go left. From there it’s simple to follow the signs to the County Park. Five minutes later and you’ll have entered the boundaries of the park. Congratulations, you’ve conquered your fear of the Southside. You can explore the park however you wish. The caveat is the whole place is poorly sign-posted. You are going to get lost. Do not despair because there is so much to see throughout the 360 acres of parkland.

Near the entrance is Pollok House – a 260 year old mansion, originally built by the park’s former owners. Don’t bother with it unless you are a member of the National Trust. It’s £6.50 to get in otherwise. Pfft. We’ll take our chances with the Highlan’ Coos. If you have wads of cash to blow and like antique furniture and Spanish paintings then go on inside. The age of the building might interest you, but there are much older ruins of three different ancient castles scattered throughout the park, but you’ll have to go exploring to find it.

Highlan’ Coos are kept in various fenced enclosures throughout the park. They smell pretty bad, but look pretty cool. We recommend not entering the fields to play with them. They weigh ten times as much as you and have big pointy horns. Don’t mess with them, as adorable as they look. If they come up to you at the fences then by all means stroke their big hairy coats.

To counteract the smell of the cows there are vast gardens next to Pollok House. Like huge. Like so big that there is almost every extant species of Rhododendrons (aka “rose trees”) in the world here. Plus some cabbages. Maybe they don’t help the smell. You can wander about here for a long time, along secluded hedgerows and up steep hillsides. It’s nice to get outside isn’t it?

Throughout the vast parkland there are many animals such as squirrels, Highlan’ Coos (as mentioned before), red deer, foxes and children. So there’s a bit more variety than the Botanic Gardens.

There is a little Wildlife Garden next to the Countryside Rangers’ station. Pop in to see what they’ve got. Though given the amount and variety of flora and fauna in the rest of the park you may already have hit your quota of being outdoorsy. There are a lot of trees…

You will notice a pretty sweet playground next to one of the many car parks. It has weird wooden hammocks and a zip-slide so obviously you need to go here. A cool wooden elephant carving really is a pretty random addition, but not entirely unwelcome.

Now on to the art gallery. The Burrell Collection was donated by the estate of shipping tycoon William Burrell in the mid-20th century. He was such an avid art collector that there are over 8000 items assembled here! Some of the work is built in to the actual building, look out for the stained glass, windows and doorways. It is actually quite impressive how this has been done. There are lots of statues, pottery and sculptures in the collection. But there are very little in the way of Western paintings, except some the exceptional Impressionists. There are some oddities like tapestries, carpets and ancient tomes that you wouldn’t find in other . The exceptional French sculptor Rodin is very well represented, including some of his finest work. The art of early Islam, archaic China and ancient Egypt and Mesopotamia also make a significant appearance in the various displays throughout the gallery. You’ll be exhausted by this point (especially after the playground) so have a little sit down in the nicely cushioned children’s pagoda. The building itself was voted the 2nd best post-War construction in 2005, so that’s something too.

Finally, Glasgow’s burgeoning burger and barbecue scene originated 2 miles away in Shawlands. The original Buddy’s take-away is now closed but their sit-in restaurant is now located about 25 minutes walk along Pollokshaws Road. If you’re hungry you might as well make a visit if you’re up for some Man Versus Food style eating.

All-in-all Pollok Country Park is an impressive piece of countryside not too far from the city centre where you can forget about concrete and concentrate on the sounds of nature. The addition of a huge and varied art collection inside the park just makes the whole trip that much more worth taking the time to come to the oft-neglected Southside. Scarecrow in the Walled Gardens by David McMunn licensed under CC-BY-SA-2.0. 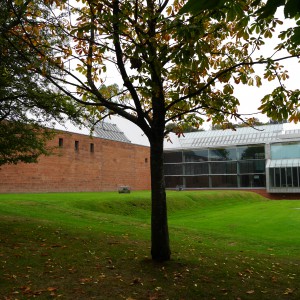 External view of the Burrell Collection by Edward X licensed under CC-BY-SA-3.0. Bronze cast of ‘The Thinker’ by Rodin by Edward X licensed under CC-BY-SA-2.0. Zeus or Poseidon (they don’t know) by John Bod licensed under CC-BY-SA-2.0.